I have posted before about the Festival of World Sacred Music yearly held in Fes [Fez], Morrocco [see 2011]. This time its a recording made in 2004, the year being most famous for Youssou N'Dour presenting his Egypt album there, but I have something else: the brothers Ali from Pakistan.

Meher and Sher Ali were born in the Pakistani border-town of Kasur in the early 1950s and received their earlier training in classical music from their father who was a court classical singer at the small Sikh principality of Patiala (India). Their father was the disciple of Fateh Ali Khan, the father of the famous Nusrat Fateh Ali Khan.
Young Sher Ali was the student of Bakhshi Salamat Ali Qawwal, while Meher Ali was taught by Muhammad Ali Fareedi, an ordained Sufi qawwal of the shrine of the 13th century Sufi, Baba Farid. Meher Ali was thus trained in Sufi philosophy, poetry, texts and rituals.
All qawwals must have a deep knowledge of Sufi poetic texts. In practice, this often means sacrificing musical quality to retain purity of text. Meher and Sher are qawwals who have achieved the rare combination of both musical quality and authentic text rendition: Sher is known for his abffity to understand the importance of rhythm (lai-kari) and render classical modes in a strong voice, while Mehr's heart-rending high- pitched voice strikes the heart (zarb-ul-qalb) when the poetry contains words of entreaty or sorrow.
Already at a young age the Ali brothers were recorded for radio and televison in Pakistan, their first album was released in 1980. More than 40 albums followed and they made many international tours spreading their music, texts and everything related to it over all continents.
summarized from bio at oneworldsmusic.com

Listen to a track from their soundcloud page

setlist: unknown [so one long uncut part of the concert]

NEVER EVER FORGET: Pap Djah's last words before left on his own in the Sahara desert (in Niger) 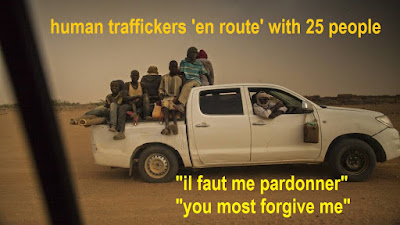 View my complete profile
This blog is made out of love for the music here presented in softcopy, if you like something, best support the music and artists by trying to buy a hardcopy yourself and visiting their concerts.

On this blog will be presented: original K7s with music from all over the world, radio broadcasts of live concerts (from K7 recordings and/or radio streams), all sorts of other musical items.
Note: selections based on personal manguetic taste.